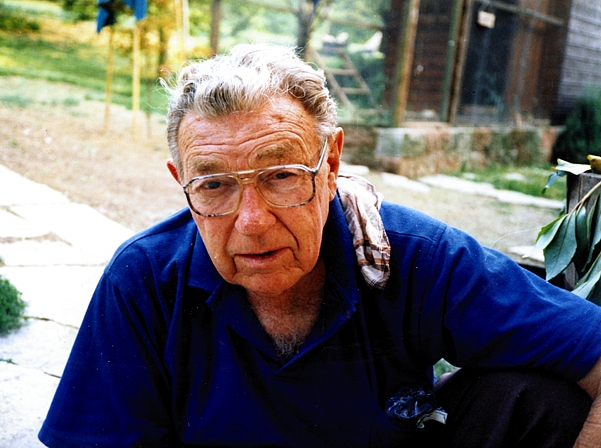 , NSW - Australia, died on 20 October, 1996. This remarkable poultry fancier, amateur researcher and historian was born on 3 May, 1921. Three years in high school were followed by work in engineering and three years on a technical college course. From 1939, interrupted by army service during World War II, he operated as amateur radio station

. In 1965, in conjunction with his son David, he started to breed Pekin Bantams and they became members of the NSW Pekin Bantam Club. It was from this time that an interest in fancy fowl, and the domestic fowl generally, took on a progressively more important role in William's life.

As breeders of Black Pekin Bantams, Bill and David Plant became Club Grand Champions on many occasions. William Plant served as Club Secretary and Newsletter editor (since 1974). This led ultimately to his co-editing The Australian Pekin Bantam (1993). The intriguing combination of interests in Pekin Bantams and short-wave radio provided the basis for his investigations and research into the origins and history not only of this variety, but into that of other varieties and the domestic fowl and poultry generally. While he wrote many articles for the poultry press on the history and development of varieties of domestic fowl and other poultry species in Australia, his increasing passion became the origin and evolution of the domestic fowl.

Some of the results of William Plant's research were published privately, including Chicken Bone Recoveries (1984) [and essential supplement (1985)] and Gallus Species - Jungle Fowl. Had the author lived longer these were intended to form part of a comprehensive treatise that would have embraced the origin of birds together with the evolution, history and distribution of the domestic fowl. Some of his findings are cited in Poultry Breeding and Genetics (1990).

To gather the information he needed, Mr Plant consulted a great many leading poultry scientists and obtained information from numerous museums, universities and institutions in many countries. It became apparent that the extensive correspondence that had accumulated could itself be of value. Bill Plant collaborated in the plan to combine this material in a book, Chattering on Gallus

, that will be published posthumously.

Although Bill Plant was apologetic over his lack of academic background and for any consequent deficiencies in presentation, his wide ranging investigations and research were carried out with thoroughness and great enthusiasm. Indeed, as he followed in the tracks of ancient domestic fowl he was like an indefatigable bloodhound, with the results related as a thrilling detective story. In spite of suffering impaired sight, the fruitfulness, dedication and clarity of vision of this scholar were striking and could be envied by many: who might be considered to be better qualified. Bill Plant's philosophy was one of continuous learning. He eschewed the idea that he had become an authority, linking this term with the cessation of learning. All those who had the good fortune to know this remarkable man will regret his passing.

The last letter sent to Bill
by Elio Corti

If it’s too much hard for you to read this letter, I ask from Marie

As they told me we have no too much time to communicate by letter, I would like to say that you are in my heart since the first day I knew you personally, and, perhaps, also before, when we was only corresponding by snail mail.

I hope only one thing: you might leave this life without sufferance, because this life was very lavish with you not only with spiritual pains.

You dictated your last will by telephone. I can assure you that my collaboration with David, in researching what you are researching since years and years, will be complete, as you can be sure that what I promise I keep.

You returned from your European journey with many ideas for the Australian breeders. One of these was to give them the Australian Poultry Standard. I think that as remembrance of the big and strong man you are, every friend of you must be available to realise this dream.

This dream must become reality. In this way for each of us it will be like living at your side, under your benevolent and reassuring smile.

The last words I told you in the Milano's airport have been: we will see in Pine River, Minnesota.

I don’t know where we will see next time. May be in the chickens’ Paradise. So, it will be possible to know definitely either all the domestic chickens are an offspring of the Bankiva  or not.

Next week I will meet Loyl in central Switzerland, near Lucerne. I will speak to him about our unsuccessful meeting in Minnesota. It will be for another time!!!

Please give my greetings to your dog Bob

and all my chickens and my three volumes of Summa Gallicana  are with you, a silent fighting winner cock.

The dedication of my job will be for the two strongest persons I met in my life:
Claudia

You are in my heart and in my mind, for ever and ever.

Rare Breeds and others

is now printed! In few copies...

...and since Sunday August 19th is on line

I quote the introduction written by Bill

This collection and coalation of my correspondence over a period of some 20 years was suggested by Dr Corti of Valenza in Italy after he visited my home in Australia during 1995. Dr Corti scanned all my files and copied much during his visit and after reading all this correspondence he decided it should go into print and undertook to coalate it and make master copies for it to go into book from.

I had not considered this aspect although many facets of the study of chickens were contained in the literature. For many years I had been researching information on first of all the Pekin (Cochin) Bantam then the Origin of the Domestic Chicken in general.

Living in Australia made this difficult for we are a long way from sources of information. This necessitated me writing many letters all over the world, hence all this correspondence. At the same time it will be noted much correspondence with the late Mr Frank Gary who was for many years Chairman of the Standards Committee of the American Bantam Association.

Being myself involved with the Pekin Bantam Club of New South Wales, now the Pekin Bantam Club of Australia, I was most interested together with my son David and our then President Neville Notley and later Tony Mills, who is now President, most interested in compiling colour standards for a number of new colours which were being exhibited in Australia. Also we felt the standard, i.e. British Standard used in Australia, could be made a little more explicit for our purposes.

In this field we sought advice form Mr. Gary, who I consider the greatest standard maker we have seen. I say this because in my library I have many standard works and I would rate the America Bantam Association Standard the most clearcut standard I have seen. It is clearcut and precise which is most necessary.

Mr. Gary freely gave his advice which we followed and the result today is that we have a Club Standard for the Australian Pekin Bantam.

I found during overall researches I explored many avenues of science and my interests led me into Poultry Genetics for I was doing experimental work in colour breeding.

In this field I have to thank Dr Clive Carefoot of Chipping near Preston in Lancashire in the UK and Fred Jeffrey of North Amherst in Massachusetts in the USA. These two gentlemen were always ready to answer any problems I had. I had much correspondence with Professor George Carter

of the Texas A&M University. Although my main theme was the Origin, Evolution, History and Distribution of the Domestic Fowl, my enquires moved into many other subjects wherein I picked up scraps of information. I do believe one can be in some cases too narrow in their field of research and thereby miss out on important information. In my experience I have proved that widening the filed of the research has proved profitable.

This work does not contain all the files of information I have received. That would take up a number of volumes. Some correspondence has been missed due to the state of my own files and I still have more information and correspondence coming to hand week by week. That will have to wait for another day.

The search for the Origins of the Domestic Fowl will last past my lifetime as there are still many questions to be answered e.g. from whence came Gallus gallus (Red Jungle Fowl) the Malay and the Asiatics. As far as I have been able to ascertain there is not enough positive evidence to answer this question.

This is I believe is the area we now have to explore.

It has generally been accepted that all Domestic Fowl descended from Red Jungle Fowl but I believe that the explanations are not good enough for me.

I would encourage those interested to explore further back in years for probably an extinct ancestor.

I hope these volumes will prove of interest to anyone reading them and I am always pleased to hear from others interested in the subject.

I am must grateful for the work Dr Corti has done to make this possible.